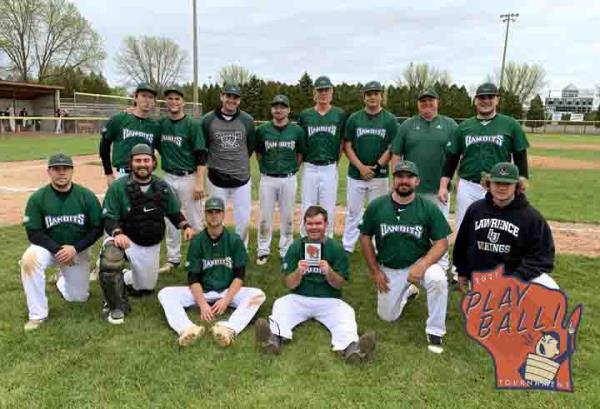 The 2021 PLAY BALL! Tournament (formerly Lakeshore Invitational Tournament) is in the books. The newly expanded tournament featured nine teams playing at four locations over two days. Pool play took place on Saturday, May 22 with the Appleton Legends, Ashwaubenon Lookouts, and Little Chute Bandits playing in Appleton; the Branch Blaze, Manitowoc Bandits, and Sparta Miller playing in Branch; and the Kewaskum A's, Sheboygan A's, and West Allis Nationals playing in Sheboygan. The top four teams played a championship bracket on Sunday, May 23 in Manitowoc. Branch, Little Chute, and Sheboygan won their respective pools with Manitowoc advancing via a wild card berth.

Little Chute advanced to the title game winning a thrilling pitcher's duel 1-0 over the Sheboygan A's to start the championship bracket. The Bandit's Hunter Schabo threw a 3-hit shutout and Griffin Klein drove in the lone Little Chute run in the sixth inning.

Manitowoc dropped a game to the #1 seed Branch Blaze on Saturday but avenged their loss on Sunday. Manitowoc's Mike Ruzek followed up Shabo's performance with a 3-hit shutout of his own. The Bandits' plated three runs in the fifth inning and came away with a 4-0 win.

Little Chute and Manitowoc met for the championship in a rematch of last year's title game. Manitowoc's Luke Mandich shutout the Little Chute offense for six innings and Jake Jeanquart delivered three hits as Manitowoc cruised to a 7-0 victory to win the tournament. Manitowoc's Chris Rohr was named tournament MVP going 3-11 with three walks and two RBI's in four games over the weekend.

Little Chute kicked off the Appleton pool by defeating the host Legends 6-3. The Bandit's Alex Kueck went 3-4 with two RBI's and Brett Grafmeier threw six innings to pick up the win.

The Bandits required extra innings to knocked off the Ashwaubenon Lookouts, who were playing their first ever game. The Lookouts went up 3-0 but Little Chute clawed back to tie the score and won it on a walk off hit by Connor Weigman in the eighth.

Ashwaubenon scored two in the first to take the lead against Appleton but the Legends put up six runs in the second inning and never looked back winning 7-4. Trent Whitcomb drove in two for Appleton.

Little Chute won the pool with a 2-0 record and was the #2 seed.

In Branch, the Blaze took the first game of the day with a 7-2 win over the Manitowoc Bandits. Branch put up five runs in the first inning. They were led by the combined efforts of Josh LaFleur and Bryce Urbanek as both players had two hits each and combined to throw all seven innings on the mound.

Manitowoc and Sparta went scoreless through six innings. The Bandits scored two in the top of the seventh on a single by Noah Jacquart. Sparta loaded the bases in the bottom of the inning but could only plate one run and lost 2-1.

Sparta put up one run in each of the first two innings against Branch but the Blaze responded with three runs in the third and added another in the sixth to win 4-2. AJ Lorrigan picked up the win with four scoreless innings of relief on the mound and an RBI single at the plate.

Branch won the pool and the #1 seed by allowing the fewest runs of all the pool winners. Manitowoc won the wild card.

At Wildwood Park in Sheboygan, the Sheboygan A's bested the Kewaskum A's 3-2. Sheboygan's Jacoby Endreas went 2 for 2 with a walk, double, and an RBI.

Kewaskum and West Allis were tied at two through six innings but the Nationals plated a run in the seventh and won 3-2. Danny Llanas led the Nats at the plate with two hits including a double and an RBI. Jon Keane picked up the win, striking out 15 batters over seven innings.

In the final game of the day, Harry Steldt put Sheboygan up early against West Allis with a solo homerun. The A's would add more runs and lead 7-1. West Allis almost completed the comeback, scoring five runs in their final turn at bat, but ended the game with a runner at third and fell 7-6.