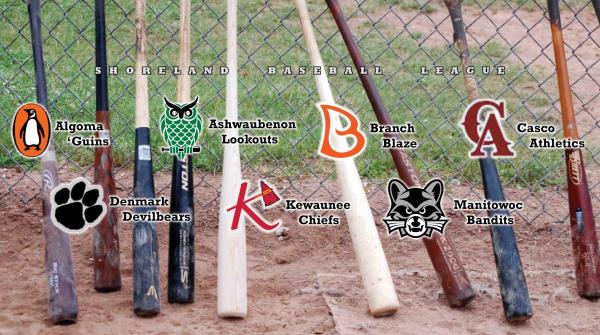 The Shoreland Baseball League will look a little different than it did in 2020. The league will welcome the Ashwaubenon Lookouts for their inaugural season and welcome back the Kewaunee Chiefs who did not play last year due to uncertainty of the availability of their baseball field. With the continued unavailability of their field, however, the Green Bay Storm will sit out another season. This brings the league to a total of seven teams playing a 12-game regular season schedule beginning in June with the three-game League Championship Series starting August 11.

During the Championship Series, the league will recognize it's award winners which include Most Valuable Player, Batting Champion, Pitcher of the Year, and for the first time a Rookie of the Year will be awarded as well.

Perhaps no change will be bigger, though, than at the top.

The 2020 season was Lee Nebel's last as Shoreland League President as he announced he was retiring. Lee was elected President of what was then called the Manitowoc County Baseball League in 1966 and held the position until his recent retirement. His involvement with the league began in 1958 as a player for the Two Rivers Polar Bears. In 1960 he was elected Secretary-Treasurer of the league, a position he also held until his retirement. In 1965 he shifted from player to umpire and officiated games for the league until 1990. When the Shoreland League Hall of Fame was created in 2017, Lee was one of its inaugural inductees. Despite having now stepped away from the league, his legacy and name will live on. At the end of Lee's last meeting as President, the league approved naming the trophy awarded to the league champion the Lee Nebel Trophy.

At the league's annual meeting on January 11, AJ Lorrigan and Kevin Konkol were elected co-Presidents for 2021. AJ was part of a group that reformed the Branch Blaze in 2006 and has been a player/manager since. He has served as league vice-president the last three years. Kevin founded the Denmark Devilbears in 1998 after prior playing for Branch from 1985 to 1993. He was inducted into the Shoreland Hall of Fame in 2019 after a playing career that spanned across four decades.

The League selected Ryan Klessig and Dale Wagner as the next members of the Shoreland Hall of Fame. Klessig played for Algoma from 1999 to 2015. He was named the league's MVP in 2002 and Pitcher of the Year in 2006. Wagner managed the Cleveland Wildcats from the league's days as the Manitowoc County League in the 1960's until stepping out of the dugout only a few years ago. Cleveland left the Shoreland League and joined the East Shore League in 1989.